This morning I actually missed the start of Paula’s swim. I know, awesome support – right. I decided to walk from the cabin to the swim start and as I was walking through the turn around (tent city) one of the female participants doing the 5x race had a flat. She asked if I knew how to change a bike tire, which I do. I ended up helping her get the tube changed and the thorn that was stuck in her tire out.

It was very helpful to have another support crew person there because he was able to provide the tire irons, bike pump, etc. After we got her tire changed, I duck taped some grocery sacks to a male participants feet (the amount of wetness is pretty prevalent right now).

I then made my way down to see Paula and the others who started the Triple this morning. 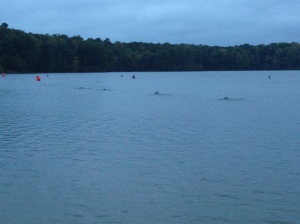 The water was actually pretty nice, it’s the air temp that was changing all morning. It would go from ok to rainy, windy and fairly chilly. I ended up huddled under the timer’s tent for most of the morning with the other support crews. There is one couple that is celebrating their anniversary today, they both love the experience (and obviously each other). If I can, I’ll share some names of other participants as I learn them.

Every two laps on the swim I would wade out and give some support to Paula.  She was really good the entire swim!  He was drinking well, ate a bar and a banana, she had a good attitude the entire time and her pace was very consistent.  I actually think her last lap or two were a little faster than those in the middle, but I’m not 100% certain as I’m not focused on timing her – just making sure she’s doing well.  Philip was the support runner this morning as he was making sure all her swim to bike stuff was ready, the materials and gear was up at the “camp” and that there was some hot coffee waiting for her as she exited the finish of the swim. 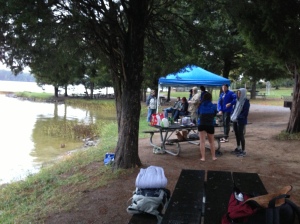 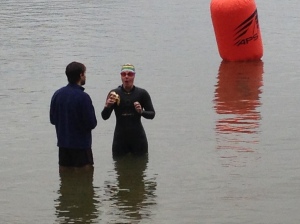 As you can see, she came out of the water will great energy and attitude!  It may be a little chilly as she gets started on the bike, but she was prepared.  Let us hope the rain can at least stay to a lite drizzle and mist, a heavy rain like yesterday is not what I wish for her for the next day or two. 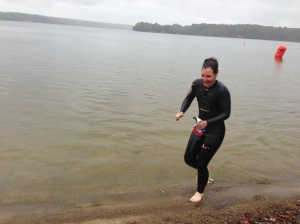 A few people have asked where you can find information about the event or track her.  Here is the website:  http://www.usaultratri.com/races_va.htm

I’m off to tent city.  I had planned on updating the blog a little more regularly, but with the rain I don’t think that’s going to be possible.  If you are friends with Paula on Facebook, Phillip has been updating it with regular posts.

We started out a little late, but what would be a race experience if things started out on time? The first thing we did was make our way to Southland Drive to Donut Days to pick up a dozen donuts. Food for the soul when the ability to consume calories gets difficult. The car was tightly packed as Paula has all the things she needs for the triple, plus Philip and I fitting in our gear two… not to mention two bikes attached to the back. 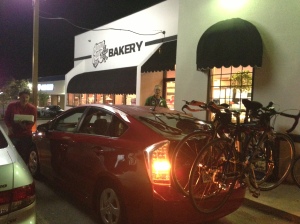 The drive was not that exciting, it included a lot of coffee and a few stops – but we made our way to Virginia as efficiently as possible. The majority of the day was nice with good temps and sunny skies, but it started to rain a little the last half hour or so prior to ending up at Lake Anna. We quickly got the bikes in the cabin and headed off to the headquarters for the weekend.

We set up the tent, changing tent and Paula hung the South African flag. Did I mention that it started raining? Well, the rain hasn’t stopped in hours and it’s a little chilly. While the triple starts tomorrow at 7am Eastern, there are people that are a long ways into the bike already (doing the 5x!). 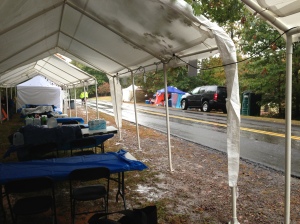 Paula made the check in and did the blood test, finger prick thingy – they said she was good (no blood doping for her… pure and legit!).  We then had an opportunity to meet other athletes getting set up for the Triple tomorrow also.  Ultra events are always enjoyable, as the athletes that are participating have a sense of being in something together, something special.  It was also nice to meet some of the others that will be support crew. 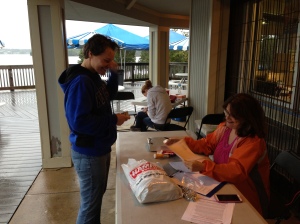 The calm before the storm!  Well, it has been storming all afternoon and evening – but you get the point.  Paula is organized and ready to go.  If you believe in prayer, send some requests for a change in weather and for strength for the athletes that have been going for 36 hours already in this stuff. 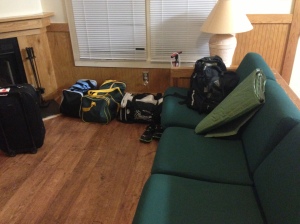